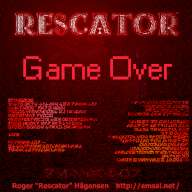 Unlike the two previous albums Ryoko and ZXY, this album has tracks that was composed through most of the 1990's, many of which was for certain music projects like games, sadly none of the games where ever completed, some of them where commercial as well but failed for one reason or another and was never really completed, so I never got to see my name in the game's credits sadly.
The music was composed on my old Amiga 1200 computer, a mix of 8bit and 16bit sounds was used. The tracks was composed using OctaMed Soundstudio, a old but very good Module Tracker.
That was back in the mid to late 1990s, now in 2010 I re-generated the tracks in 16bit 48KHz, processed them as 32bit 48KHz, cleaned up clicks and pops, raised the lower end a little, added some warmth, master levels calibrated to the K20RMS (-20dBFS/83dBSPL) audio standard for consistent and comfortable listening levels similar to the SMPTE movie standard, and turned them into 24Bit 48KHz FLAC with no dithering.
So you will be hearing the "computer" sound in all it's glory (and flaws)!
I thought it would be a waste to let this music just vanish in dust, so I pieced together this with the music I made for games, demos, and various other projects.
As seems typical for me during those years, sometimes the song morphs into something completely different thruout a song. What it may appear to be at the start, may not always be the end!
This is a very nostalgic album, I'm not saying the previous ones where not but... there are some tracks here that was supposed to be the first of many for that game's soundtrack, and some may still be a bit rough around the edges.
Again I give you some bonus tracks, "Walking Down The Street" is a vocal experiment, and the second bonus track just seemed to fit with this album. Enjoy!
Roger "Rescator" Hågensen
http://Skuldwyrm.no/